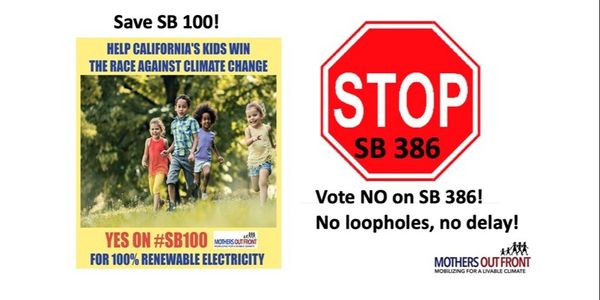 Tell the California State Senate to defend our leadership on clean energy by voting NO on SB 386.

Special interests are pushing SB 386 to create a loophole in SB 100, California's landmark new climate law, which mandates that 60% of CA's electricity come from renewable energy sources by 2030.

SB 100 was carefully written to EXCLUDE big dams from counting as renewable energy—that way we can drive up demand for new solar, wind & geothermal projects to create thousands of new jobs, clean up our air & drive down the cost of renewable energy.

Click here for a call-script & to identify YOUR CA state senator.

As devastating wildfires sweep across our state, fueled by climate-driven drought, extreme heat and high winds, the need for action on climate change has never been more urgent. We need to accelerate our transition to 100% clean energy ASAP.

In 2018, the state legislature passed SB100 and governor signed SB 100 in to law.  SB100 will move the 60 percent goal to 2030 for renewable energy and also require that 100 percent of the state's electricity be generated by clean energy sources by 2045.

A super majority of Californians (72% adults, 67% likely voters) support the 100% goal according to recent polling by the Public Policy Institute of California (p. 19).

We can do this! California needs everyone's support, starting with our Sacramento decision makers.